The Fear of Unicode/UTF-8

As a programmer – especially as a C/C++ programmer – you might be reluctant to embrace the Unicode beast. You vaguely know that wchar.h contains various functions to handle the dirty things, but it does not make things clearer. In Java, programmers are using String without troubles, until they want to convert them from/to arrays of bytes (hey, how Java is supposed to handle supplemental characters ?)

Unicode is very simple in its essence, even if you can make things unreasonably complex (have you ever decomposed an Unicode character ?): this is basically the extension of the ASCII concept (assigning a number to a character) to fit more characters.

The Simplicity Behind The Complexity

Yes, Unicode is rather simple if you keep things simple.

Let’s begin with some concepts:

More Precisely, What About UTF-8 ?

Let’s have a look as UTF-8, which is generally the preferred encoding for storing and sending data (most RFC are using UTF-8 as default encoding nowadays).

The good news is that 7-bit ASCII is a subset of UTF-8: nothing will change on this side.

For the rest, UTF-8 is a very simple and smart encoding (Ken Thompson is behind this fine piece of work), and decoding it is not really hard.

To understand UTF-8, you just need to know one thing: for a given byte, visualize its 8 bits, and count the number of leading “1” (ie. the number of “1” before the first “0”). This is the only information you need to know whether this byte is a single 7-bit ASCII character, the beginning of an UTF-8 sequence, or an intermediate byte within an UTF-8 sequence. Oh, and if the byte is the beginning of a sequence, you also know how long it is: its length is precisely the number of leading “1”. Isn’t that magic ?

This is an extremely good property of UTF-8: you can easily cut an UTF-8 string/skip characters/count characters without bothering about actual code points. Only bother about leading “1”’s.

Oh, by the way: did you know that the number of leading “1” could be computed without using a loop ? Take a look at the Hacker’s Delight recipes (do not hesitate to buy the book, it is worth it, and recipes are presented with their mathematical explanation – there is no pure magic out there)

We know how to recognize UTF-8 sequences, and we even know how to get their length. How to encode Unicode points ?

For example, if the leading byte defines a 4-byte sequence, then it will start with four “1”, and a “0” delimiter. Three bits remains available for encoding (the first three bits of the Unicode point number, starting from the leading “1”, will be encoded there). Continuing characters (in sequence) have a leading “1” followed by the “0” delimiter: six bits are available for encoding.

Let’s go back to the “姫” Chinese character. This character is 59EB in the Unicode charts ; here’s how it is encoded as E5 A7 AB (and sorry for my lame Chinese writing skills!): 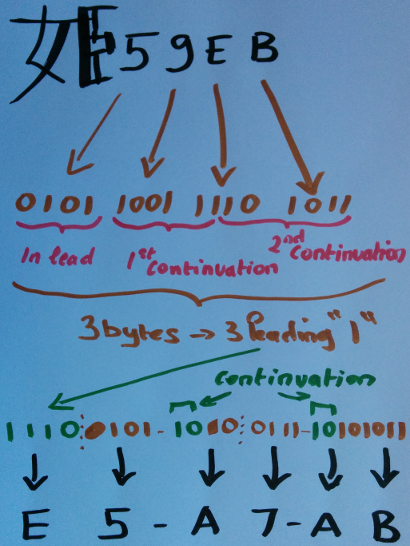 An Exercise For You!

As an exercise, you can now easily rewrite the getwchar() function in an UTF-8 environment (locale).

Here’s my try (do not cheat! look at this solution after you tried!):

Note that the above code can be improved a little bit, by unrolling the for() loop, and using few switch.

TL;DR: Do not worry, and embrace UTF-8 and the Unicode world.